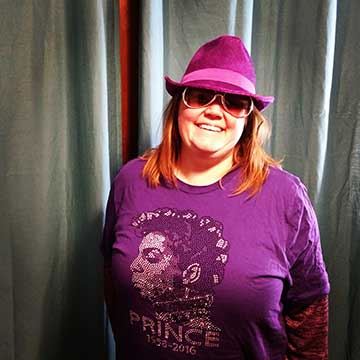 I have been know to make a fool of myself to get my point across. So at a recent Toastmasters meeting I  gave a speech about Prince, Elvis Presley and the Supreme Court of the United States. What might they all have in common? Let me tell you as I also add a picture to this blog of me dressed as Prince wearing Elvis glasses. For the speech I also had a really neat 75th Anniversary history book about an amazing organization!

Yes, I stood before a crowd in January 2017 dressed as Prince with a good friend of mine at my side. She was dressed as George  Michael. I was participating as a co-emcee for an annual gala with the Saint Paul Jaycees. And yes, my friend and I figured this would make Halloween easy this year; we could just dress up again as those two. Cue the addition of a purple hat to my getup and I was ready for Halloween 2017.

In August of 2013 I also stood before a crowd at the annual event the Saint Paul Jaycees host called the Railroad Social. The annual event has some unwritten rules and traditions behind it. The main point of the Railroad Social is to reveal the next president of the Saint Paul Jaycees Chapter through a humorous skit that cracks the audience up. In 2013 it was revealed I would be that leader. I was asked to give a speech about my vision for the year. That speech was one of my firsts in front of a large audience and I was terrified… However, why not talk about something you are familiar with? So I talked about Elvis Presley and his most favorite award. It even has its own display case at Graceland. That award is called a Jayson, which stands for Jaycees: Active Youth Serving our Nation, and it was presented in 1971 by the National Jaycees organization. The Jayson awards are given to people that do good for their communities and show great qualities in their service to humanity. Elvis was extremely honored to receive recognition for something he strongly believed in, giving back.

In 1984, the United States Supreme Court ruled in favor of a case before them with a 5-0 vote. The two justices who abstained were former MN Jaycees. This case overturned the National Jaycees right to revoke the charter. This decision allowed women to run and hold leadership roles in the Jaycees. The Saint Paul Jaycees charter in the national organization had been revoked in 1983 because it had installed a female president along with other females on the board of directors. It is hard to believe the organization I was asked to lead in 2014 had only been allowed female Leadership for 30 years. The right to vote was granted in 1918 but it took nearly 70 more years before women were allowed to run community service organizations. Because of Saint Paul Jaycees fighting all the way up to the National Supreme Court, organizations like the Lions, Rotary and Kiwanis could accept female leaders.

Back to what do Prince, Elvis and the Supreme Court have in common: They all relate to my experience with the Saint Paul Jaycees. I invite you to learn more about the organization and how you can get involved in building your leadership skills while doing good in the community. How do you learn more? Attend an upcoming event. Join the organization as we put on one of the best community service events of the year. I hear Santa will be making an appearance at our annual Special Olympics  party! The chapter throws an amazing party for Saint Paul area Special Olympians on December 9th. I will always believe in the line of the Jaycees creed “Service to Humanity, is the best work of life!” As well as believing in being able to make a fool of myself while promoting the Saint Paul Jaycees.